What Exactly is a Construction Exoskeleton?

Technological advancements are forever changing construction as we know it, one look at something known as a construction exoskeleton will tell you that.

They might look like something from a far future, but these wearable machines have already begun making their way to construction sites around the world. Toyota, for example, has been using this type of technology for years, and has praised its ability to increase worker productivity while reducing fatigue.

Exoskeletons benefit workers more than anyone else, not to mention, project managers who benefit from less injuries and increased workflow. The fact that they look cool is simply a byproduct of their varied functionality.

You see, there isn’t one type of construction exoskeleton. There are multiple, each optimised to benefit the wearer in a variety of ways on site, be it to provide back support, to improving safety when lifting heavy objects.

We’ll be covering the benefits of construction exoskeletons later. For now, though, let’s define what an exoskeleton is for reference.

What is an Exoskeleton?

Exoskeletons, or exosuits as they’re sometimes called, are wearable machines, used to streamline certain construction processes and to minimise injury to those wearing them.

Traditionally, an exoskeleton would refer to the hard coverings found on certain types of animals, only in this instance, it’s all man-made, and used for specific purposes.

Exoskeletons have various medical applications, in helping people correct their posture, or provide muscle support after suffering an injury. The same applies to exosuits used in construction, only they do take things up a notch depending on the type of exoskeleton worn.

With construction exoskeletons, there are two main types to consider. One focuses on distributing the weight of the wearer to alleviate any fatigue, and the other can enhance the wearer's strength.

We should point out that mechanical exoskeletons require no power in order to function, whereas electrical exoskeletons do. In other words, the former is a few levels up from your standard weight belt, and the latter is like something from a science fiction movie.

How does a Construction Exoskeleton Work?

Exoskeletons work in all kinds of unique ways, depending on the type of construction exoskeleton you’re looking at.

Distributing the weight ensures that they can work without restrictions, restrictions that would otherwise be caused due to continued wear and tear of certain joints and muscles.

Electrical exoskeletons are the exception to the rule, although they do distribute weight pretty well to ensure they aren’t too heavy.

It goes without saying, but anyone that is operating this machinery should ensure they’re wearing it correctly before any work begins. A) because the equipment can cause serious injury if used inappropriately, and B) They can be incredibly expensive.

Every type of construction exosuit will have its own set of instructions to follow. It’s not a case of just attaching it to your back and around your waist, as not every exosuit will require need to wrap around these areas. 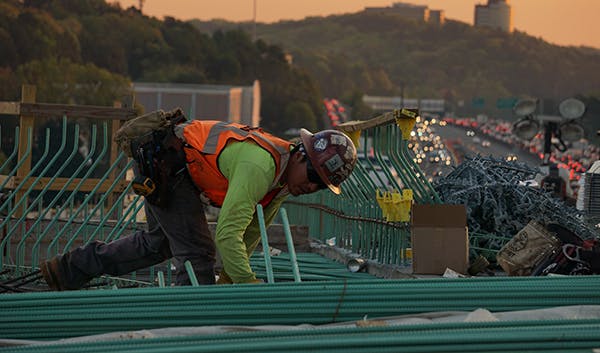 Know that there are several types of construction exoskeletons available at the moment, some more advanced than others. Each exosuit will benefit various parts of the body in some way or another.

For example, the V22 ErgoSkeleton is a construction exoskeleton optimised to provide lumbar support to the wearer – one that provides feedback to the user when they aren’t bending down the right way.

The easiest way to break these exoskeletons used in construction down is to group them into specific body parts or movements. We’ll start with crouching support.

Workers can spend hours on their feet which can lead to lasting pressure on the knees and legs, which is where these crouching support exosuits enter the picture.

Crouching-specific exoskeletons provide support to the joints and muscles by giving workers a makeshift chair that forms whenever they lean back – as if they were to sit down as you usually would.

One that instantly comes to mind is the Chairless Chair 2.0 from Noonee. This exoskeleton connects at the waist and at the feet, with no loss in movement for the wearer.

A previous version of the chair was on the heavier side before the 2.0 was introduced. Unfortunately, the weight of some construction exosuits are part of its overall drawbacks, but again, we’ll get to that later.

Improved grip strength and dexterity are the main benefits of powered gloves. These exoskeletons aren’t nearly as bulky as some of the other wearable machines covered here, but they still have a lot to offer when operating tools and picking up certain objects.

Some power gloves have smart connectivity, in that they can analyse repeated movements and provide appropriate data in response. These gloves typically connect at the bicep and over the shoulders for maximum stability. 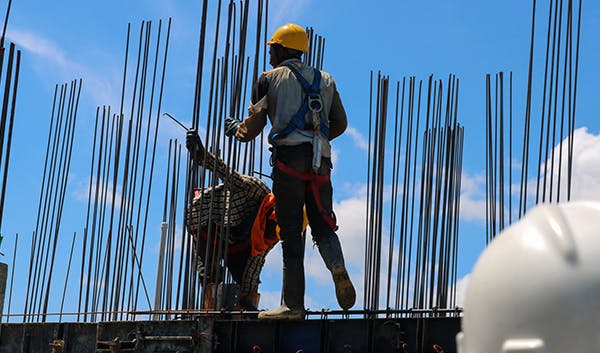 Like crouch supporting exoskeletons, back supporting exosuits target a very specific area of the body. Workers put their back into physical tasks daily, which can lead to injury after a while if the person in question doesn't have the best posture or positioning.

A construction exoskeleton optimised for back support will almost always wrap around the waist to provide lower lumbar support, and just under the arms to support the spine.

Some exosuits, like suitX’s backX exosuit, feature pads that sit on the thighs, again, to maximise the level of support received.

Shoulder supported exosuits are perfect for workers who lift heavy tools or materials high above the waist.

Anyone who spends quite a long time drilling, or applying parts at high places, will know the strains of keeping your arms held above your head for extended periods. Your joints lock up and the pain begins to spread to other parts of the body.

Shoulder supporting exosuits target this area specifically, redistributing the weight from the shoulders and arms to prevent overuse.

Most shoulder supports aren’t as heavy as some of the other construction exoskeletons out there. They don’t impede the movement of the user that much either, allowing them to go about their tasks as normal.

When most think of construction exoskeletons they instinctively think of full-body exosuits.

These suits are mostly electrical in that help maximise the user’s strength when lifting heavier objects on site, while also reducing the various stresses affecting the body.

Full-body exoskeletons are the strongest out of all other exosuits. The Guardian XO full-body exosuit is one of the strongest on the market, capable of amplifying operator strength by a factor of up to 20x their original strength.

Some suits will drain a lot of power over prolonged use, so it’s important to keep track of time when wearing one of these things. The last thing you want is it to give out when you’re lugging scaffold boards or heavy generators about.

What are the Benefits of Construction Exoskeletons?

So we’ve answered the question of ‘what is an exoskeleton’ but what about the overall benefits of using this type of equipment?

Construction will always be a pretty dangerous industry to work in, there is always margin for error, and within that error is often injury. Exoskeletons, like hard hats, work boots and welding goggles, are all there to prevent injury.

The only difference is construction exoskeletons can directly amplify productivity. The use of a full-body exoskeleton can turn an hour task into a 15 minute task, thus freeing up more time!

What’s more, they give contractors with physical ailments the opportunity to work again, since the machinery does most of the lifting.

To recap, the benefits of construction exoskeletons include: 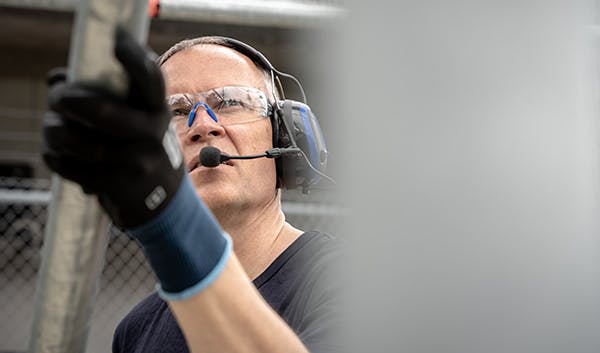 What are the Drawbacks?

The thought of increased productivity and less accident reports to fill in will no doubt appeal to a wide range of project managers out there. That being said, there are some drawbacks to construction exoskeletons that you should be aware of.

We’ve already covered one of the main drawbacks, that being: wearing these exosuits wrong where you haven’t read the instructions properly, if at all.

Electric exoskeletons tend to be a lot more troublesome than mechanical exoskeletons, as there’s a lot more that could go wrong, the most obvious issue being: a flat battery when you’re in the middle of doing something.

Some electric exoskeletons do have cables that connect into a separate power source which should negate any energy troubles. However, these cables could lead to more hazards on site, especially if they aren’t tucked out the way.

Construction exoskeleton manufacturers are working to make their products lighter, but some are still incredibly heavy too. The batteries take up a lot of the weight, which could injure someone, again, if they aren’t wearing it properly.

We’ve yet to mention the costs tied to construction exoskeletons. The high costs associated with these high-tech exosuits is the reason why you don’t see more of them.

Some exoskeletons sell for hundreds of thousands, which is money that most construction companies wont have just lying around.

To recap, the drawbacks of construction exoskeletons include:

What Exactly is a Construction Exoskeleton?

The future of construction is now it seems, given how many companies – construction-based or otherwise – are using exoskeletons on a day-to-day basis.

The applications of these wearable machines hold no bounds. In construction, they’re used to mitigate certain tasks, while reducing the likelihood of injury in the process. It’s no wonder they’re used in a medical capacity also.

Still, there are some drawbacks, with the cost of this equipment being far too high for most project managers to accept – or afford, to be honest. The cost of construction exoskeletons could drop as time goes on, as more exosuits are introduced, but for now, know that your options are limited if you work to a tight budget.

You’ll find that most types of equipment are really expensive to buy outright, which is why renting is a much more viable option.

We’re YardLink, a provider of various construction-based tools and equipment, offering everything from scaffolding towers to telehandlers. The equipment you hire from us will always get the job done right.

Get in touch to find out more!

What is an exoskeleton?

An exoskeleton is an outer-body shell made out of various metals and materials, used to rehabilitate certain injuries or mitigate certain tasks in a construction setting. Traditionally, exoskeletons refer to the tough exterior found on some animals.

When was the first construction exoskeleton invented?

The first exoskeleton was invented by General Electric back in 1965. The ‘Hardiman’ as it was known, was a large full-body exoskeleton designed to increase the strength of the user in order to lift heavier objects.

What are the main benefits of exoskeletons to construction work?

Construction exoskeletons have been known to reduce the risk involved with certain tasks, while reducing the risk and strain associated with said tasks. These wearable machines can lead to an increase in productivity and give contractors out of work with physical ailments the chance to get back to it.