What Is an Auger and How Is it Used in Construction?

Often searched for as ‘auger drill,’ or ‘auger drill bit,’ an auger is an essential piece of equipment used in construction.

This spiral-shaped tool is a lot more than a simple drilling tool. It actually has multiple uses on site depending on the task at hand. Like other speciality tools, there are multiple types of auger of note (which is why it is essential that you understand what it is and how it’s used).

Many of you reading this will already know an auger is, having used one in the past or having a rough idea of construction tools/equipment, whereas others might find themselves left wondering.

Today that changes, as we drill down into what an auger is, and how they’re used in construction, not to mention the various types of augers available.

What Is An Auger?

An auger has one role — a role that it does, arguably, better than any other tool — that being: drilling holes. Now what those holes are used for will vary from one construction site to the next.

Some will use them to dig holes used for telephone poles, others, solar posts. Those are but a few uses, others include:

Not every auger is the same, although they do look quite similar in a physical sense. The rotating metal shaft is easily recognisable. We should mention that the twisting metal shaft at the end of the auger is known as a ‘flighting.’

Augers appear in many forms fitting for set tasks. You have auger drill bits that attach themselves to power drills, handheld augers that you can manually use yourself, and then there’s the moderately sized augers typically attached to other machinery - be it tractors or diggers. 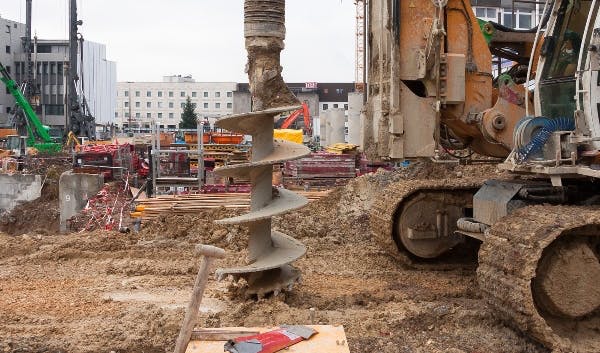 The size and shape of each auger will differ, so it’s important to choose wisely in line with what you’re hoping to achieve project-wise.

You wouldn’t hire or buy an auger drill bit fit for a digger to do some standard gardening would you? No, which is why info like this is vital as it could save you a lot of time and money.

As mentioned, an auger is a multi-faceted piece of equipment in that it doesn’t fill one particular use, but rather, several. The most common of which is the auger drill bit (something we’ll cover in more detail later).

Auger drill bits come in multiple sizes, as you can imagine, anywhere from 4 inches up to 18 inches total. Which you choose will depend on what you’re drilling and how deep it is.

Larger augers, as in those operated by multiple people, are a lot more powerful in that they can dig for a maximum of 18 inches in diameter.

Any deeper/wider, and you’ll probably have to look at something a lot bigger to get the job done.

How Is An Auger Used In Construction?

There’s an auger for every task no matter the size and scope of the project outright, which is something we know first hand at YardLink. An auger is an important piece of kit to have on any construction site simply due to how versatile it is.

We’ve already covered a few of the main uses above in gardening, woodworking and ice drilling, but there are more areas we need to tick off for this breakdown to be as comprehensive as possible.

Let’s look at some more uses of an auger, to give you a better idea of how beneficial they could be to your next project.

Since we used the gardening example above, it’s only right that we start there. A garden auger is typically handheld.

One of the best ways of describing a garden auger is to liken it to a pogo stick of sorts, given it has handles and a twirly bit at the bottom used to dig fence holes into the ground by hand. It’s a bit of an off-kilter description, but it works, right?

The benefits of using a garden auger is that it’s a lot more time efficient than any other tool, and it does a great job in keeping the quality of the soil consistent when planting seeds and flowers.

An earth auger is very similar to the garden example we’ve given above, only the long metal pipe often has a lot more uses that aren’t limited to green thumb-related projects.

The terms ‘earth auger’ and ‘garden auger’ are often interchangeable with one another. We just thought it was worth pointing out. 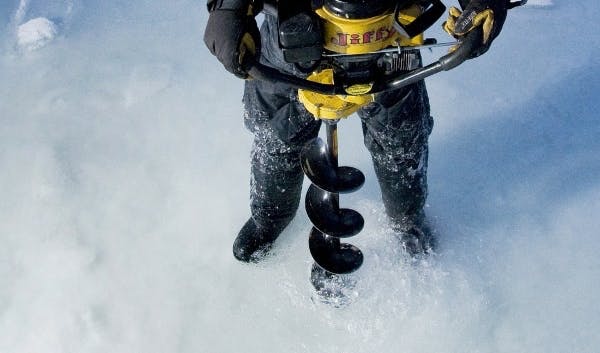 Unlike the handheld garden augers we’ve just covered, ice augers are far sharper in comparison, and they need to be in order to pierce/crush thick blocks of ice.

Most commonly used in ice fishing, ice augers can either be handheld or engine-powered. You see, the cold can make it difficult for the auger operators to get a good grip at times, meaning it’s a lot harder to penetrate the ice to create a clean break.

This is why petrol and propane-powered auger drills are used, as they can cut through the ice a lot quicker and with minimal effort in comparison.

We’re going from something small to something a lot larger with the next auger here.

A grain auger is used a lot in farmwork across the fields. If we can use another playground comparison for a second, it looks a lot like a seesaw, only it doesn’t pivot from one side to the other.

Instead it stands tall, consisting of a long metal tube with the flighting spiralling around it, counterclockwise. An auger of this kind will typically deposit and or distribute grain into silos or bins, which will then be placed into trucks set for transport.

The above uses of an auger tend to focus more on the industrial uses of this equipment. An auger drill bit, on the other hand, is where most will use them in an everyday setting.

As its name suggests, an auger drill bit simply connects to a drill, and is used to put holes into wood and various other materials.

Auger drill bits are normally sold in complete sets, consisting of multiple heads in the same pack, all of which vary in terms of sizes.

These auger attachments make piercing holes in materials look and feel so simply compared to other drill heads, allowing for:

An auger drill kit does as advertised, it connects to diggers and can be used to make post holes or boring holes into the earth. Equipment like this is a lot more reliable on the construction site for some of the larger-scale projects.

The holes created through an auger drill kit are a lot more consistent in contrast, which goes without saying considering it is handled by a machine.

We here at YardLink know a lot about this particular attachment as we’ve leased many auger drill kits to construction companies prior — all of whom have used this piece of kit in a variety of ways. 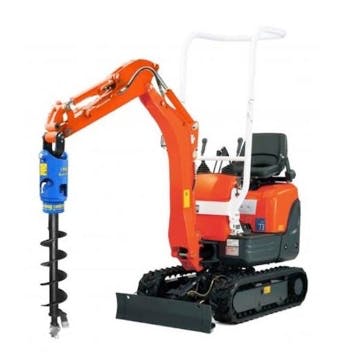 The answer to why you should hire/buy an auger is simple: it makes life on the construction site a lot easier.

An auger appeals to such a range of people, each representing a set industry (industrial, lifestyle, farming, etc).

It works because equipment like this is highly versatile and can apply to everything from drilling holes into wood to laying the foundations for fencing and plants. It helps that there are varying types of augers too (handheld, drill kits, engined, etc).

We’ve proven they’re great in an everyday sense too, what with the number of auger drill bit packs you can find right now. In short, augers are universal, great in a commercial sense and in everyday life.

Since we’ve covered what an auger is and how it’s used in construction, there’s nothing left to cover other than the common questions often associated with these spiral-shaped tools!

This will be a very handy section to read if you have a basic understanding of augers but want to go from novice to intermediate very quickly. It will also ensure that you’re aware of what to do/not to do moving forwards.

Let’s begin with a very common query: the difference between an auger and a drill.

Is There A Difference Between An Auger And A Drill?

Auger drill bits are an essential attachment to drills, so there’s less of a difference between the two as they’re linked.

Auger drill bits, as mentioned, have greater drilling depth and are generally a lot smoother/consistent with the holes they make.

In terms of boring, these drill bits are also a lot easier to use from a pressure required standpoint too.

Can Any Auger Be Used In Ice?

Unfortunately, not every spiral-shaped tool you come across can be used in ice-based tasks. Ice tends to be incredibly difficult to break, and then there’s the risk of causing cracks in the ice which then makes it a hazard to walk across.

No, there’s a reason why ice fishers use a special type of tool to drill holes underneath them — mostly due to safety, and ease of use.

Using an earth style drill to put holes in the ice would only damage your drill if you tried, plus there’s that risk factor, and no one wants to fall into sub degree water. 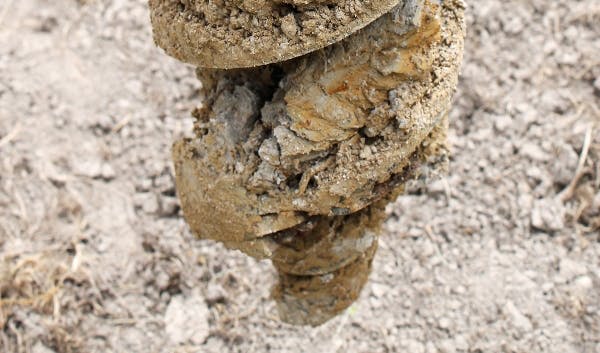 Can It Cut Through Rock?

They’re powerful, just not that powerful — especially those that have motors or an engine attached. Rocks, heavy clay and even tree roots can be a tricky one for an auger to cut through.

If that does happen, then you’re either going to have to dig out the obstacles by hand, or get a stronger piece of machinery in to get rid of it so that the work may resume.

What Types Of Machines Fit This Tool?

There’s been a lot of talk around handheld augers, but what about those that attach to heavier machinery? Well, let’s talk about them.

Augers are very popular on mini excavators — as in the diggers that look like the miniature versions of those used to distribute large piles of earth from one location to another. Mini excavators work perfectly with an auger due to this size difference.

Think about it, the smaller the excavator is, the easier it can fit areas like backyards and small landscaping sites.

What Is an Auger and How Is it Used in Construction?

As you can see, an auger plays an essential role in construction, capable of completing a wide range of tasks that vary in size and scale.

They might not be able to cut through rock and heavy clay, but they will make life easier come construction time (even if they do resemble futuristic pogo sticks).

To recap, this spiral-shaped tool has multiple uses, and can be used by hand, or attached to other tools such as drills/heavy machinery, such as mini excavators. Augers and auger drill bits aren't exclusive to industrial projects either, they can be used by farmers and people in an everyday setting when gardening.

We know a lot about the tools/equipment you need to get your projects up and running — including the augers we’ve just covered.

For more information on how we can help you and your project, get in touch with a member of the YardLink team.